Vision and Devastation: What Europeans Should Learn from the War in Ukraine

Of course, there are many lessons that we should all learn from the tragedy unfolding in Ukraine right now – about brutality and violence, but also about solidarity and courage.  None of these lessons are new.  All command our attention.  But one lesson is likely to go overlooked.  That lesson is not about the big debates of the 1990s concerning the ‘end of history’ or the ‘clash of civilizations’, neither of which seems to shed much light today.  That lesson is about an earlier debate that took place in the late 1950s and 1960s about the ‘end of ideology’.  What the war in Ukraine shows is the tremendous power of political ‘vision’ both for evil and for good.

The essential claim in the ‘end of ideology’ debate was that mass consumerism had eliminated much of the divide between labour and capital and so closed the gap between competing world views.  Grand ideals no longer offer much motivation in such a context as ‘left’ and ‘right’ converge around the middle.  What matters for government is not mapping a pathway to some millenarian future or fostering some comprehensive depiction of the ‘good life’.  Instead, it is making marginal improvements in the technology of government, solving problems, and watching out for the unintended consequences of their policy solutions.

This debate about the end of ideology penetrated rapidly into political life – arguably on both sides of the iron curtain.  Politics under communism suffered from cynical disillusionment; meanwhile, in democracies, politicians became technocrats and looked for ways to insulate their policy instruments in non-majoritarian institutions like independent central banks.  Paraphrasing German Chancellor Helmut Schmidt from the 1970s, ‘vision’ became something better left to eye doctors than to politicians.  His one-liner became a sort of mantra.  You will often hear Schmidt’s words repeated by European leaders.  They are practical women and men, managers in politics.  For them, any talk of vision is a distraction from the real challenge of government.

The European ideal suffered the same fate.  The end-of-ideology debate coincided with the creation of the European Economic Community and the rise of Gaullist nationalism.  The two sat together uneasily.  Borrowing from Craig Parsons, a ‘Certain Idea of Europe’ could not coexist with a ‘Certain Idea of France’.  We teach that Europe prevailed in this conflict, and so was able to expand both in terms of membership and into new areas of activity.  Now I am less certain that was a victory.  Somehow Europe became another form of technocracy – a better market, a stronger competition authority, a regulatory superpower, a single currency, a banking union – but remained unworthy of a constitution.  Meanwhile, France is still France, and French political leaders still pride themselves on their links to Gaullism.

The contrast between Europe as an ideal and Europe as policy arrangement is nowhere more obvious than in the enlargement to the countries of Central and Eastern Europe.  Those countries sought to join the European Union after the fall of communism as a vindication of their status as European countries.  They formed odd coalitions to undertake impressive reform efforts to qualify for membership.  They lobbied hard for recognition and acceptance.  And ultimately, they convinced an initially sceptical West European political leadership to allow them to join – in some cases, even before they had completed the reform process.

The vision of a Europe whole and free was compelling.  The experience of membership has been different.  The governments of Central and East European member states quickly adapted to European technocracy.  They lost their sense of a European vocation and gained skills in pursuing their national interests.  This was not a betrayal of membership; it was and is how the game is played.  The French are not the only Europeans capable of producing Gaullists.

This rejection of idealism and embrace of technocracy is a profound source of European weakness.  That weakness was easy to see during the debate on British membership.  The proponents of the Leave campaign could argue they were going to take back control and restore national greatness; the proponents of the Remain campaign responded that the result would be less efficient and effective policymaking.  Even so, the referendum was a close-run thing.  Moreover, the rest of Europe reacted to Britain’s exit by uniting around the preservation of their institutional arrangements – the Court of Justice and the internal market, first and foremost.  Hence it was still possible to leave ‘vision’ to the ophthalmologists.  The British were always awkward partners.  They were the exception that proves the rule.  If anything, the costs of Brexit for the British would be a lesson in the benefits of good governance.

What the war in Ukraine reveals is that the real aberration is Europe.  Russia clearly has a vision for what it is trying to accomplish.  We may not want to buy into Russian President Vladimir Putin’s unique version of Russian history, but it is hard to deny that it makes for a compelling narrative for many Russians.  Russian expatriates who phone home to check on their relatives often report a sense of cognitive dissonance; they can describe the horrific events in Ukraine, but even close family members will not believe them or will deny their interpretation.

Ukrainian President Volodymyr Zelensky also has a vision that he has used to mobilize his country to feats beyond all expectations.  That vision not only managed to conscript the entire adult male population into military service, but it has attracted unprecedented external support, shamed those who fail to make an adequate contribution, and moved to tears those who know they could do more.  Zelensky also has a clear vision of Europe and the importance of European Union membership.  That vision is not about better market regulation; it is about far more.  That deeper meaning is what makes the horrific photo of the EU keychain that fell next to the hand of a victim slaughtered in the massacre at Irpin instantly iconic.

China also has its vision.  So does the United States.  The Chinese vision focuses on American hegemony and justifies Russian action as a predictable response to NATO enlargement.  This is a vision where the balance of power has to be respected, and where the renaming of Taiwan’s representative office in Lithuania is a violation of Chinese sovereignty.  The American vision strikes a difficult balance between Western leadership and domestic political exhaustion.  That balance relies heavily on America’s partnership with European allies.  But it is a jaded sense of partnership; American policymakers recognize the tremendous potential for Europe, but they fail to understand the technocratic nature of the European project – and hence why the European Union lacks an effective common foreign and security policy.

What the Americans are hoping for is a vision of Europe that is strong enough to act as a true partner to the United States and to push back against China’s balance-of-power style of realism.  This Europe should aspire to be the kind of union that Zelensky and the rest of Ukraine imagine.  And it is a Europe that should be at least as compelling as the narrative Putin tells about historic Russia.  That kind of vision is not something that the eye doctors can address.  Moreover, it should find appeal across very different member states.  What is required is nothing short of political alchemy.  But Ukraine shows us that the alternative is unacceptable.  That is the lesson.  Either there is a vision of Europe or there will be brutal, violent conflict.  Moreover, this is not the first time Europeans have had to learn this lesson.  Nothing we are seeing in Ukraine is new.  But Europeans are capable of learning.  The last time they faced this challenge was at the start of the European project. The founders of Europe were visionaries.  It is time to return to that tradition.

Erik Jones is Director of the Robert Schuman Centre for Advanced Studies at the European University Institute. 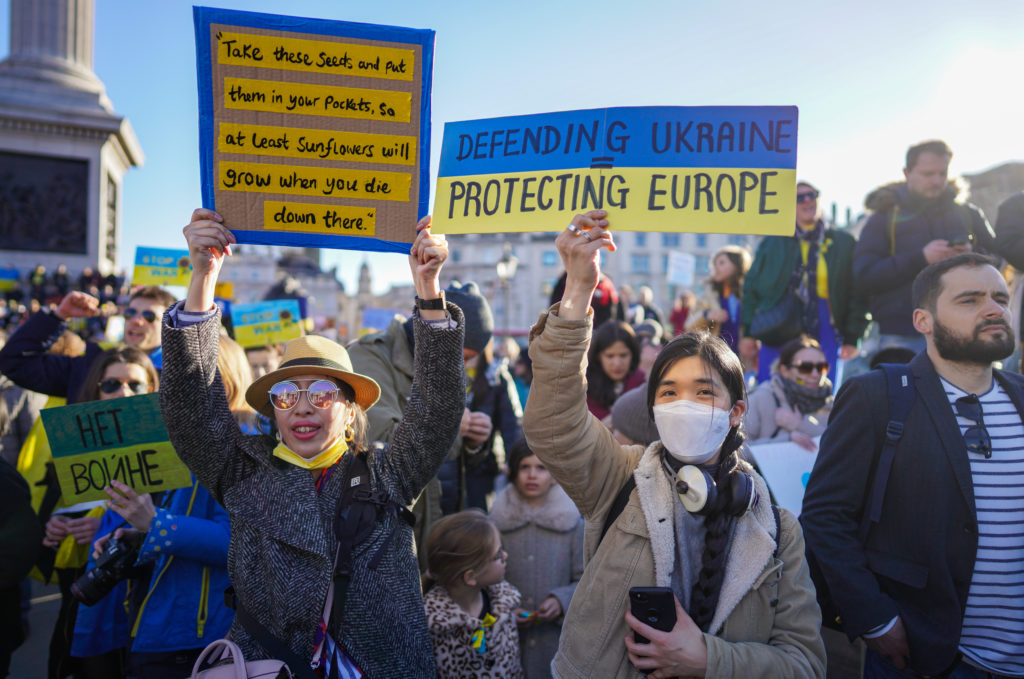